Taylor House is one of the most striking properties in Aurora. Designed to be admired from Cayuga Lake, its impressive facade now welcomes guests to a sophisticated event center—an entire building for your group, in the center of this picturesque and walkable village.

Aurora is home to a luxurious resort in a single square mile: a state-of-the-art wellness spa; an award-winning fine dining restaurant, a historic neighborhood tavern, and a chic demonstration kitchen; a three-mile nature trail, staffed by a team of professional guides; an extensive selection of onsite activities, including a staffed waterfront—all in the heart of world-class wine country.

The first floor of Taylor House offers grand parlors for social gatherings and breakout meetings, separated by pocket doors for flexible layouts. The signature space on the ground floor is the spectacular dining room and spacious patio with seating for up to 50 guests.

Upstairs, a striking modern boardroom offers all of the state-of-the-art amenities for productive and energetic meetings. Original crown moldings, marble fireplaces, and full-height windows—with spectacular views of the village and the lake beyond—elevate this space far beyond a conventional meeting room.

We’d love to help plan your next productive retreat!

Taylor House has proudly stood in the heart of Aurora for nearly 200 years. Throughout its history, the iconic Greek Revival mansion has played a central role in its community over three distinctive chapters: first, as another grand Morgan family home, then as a well-respected school for girls, and later as the home of the Wells College president. Now resplendently restored, Taylor House is a gathering place for memorable celebrations, productive meetings, and remarkable retreats. 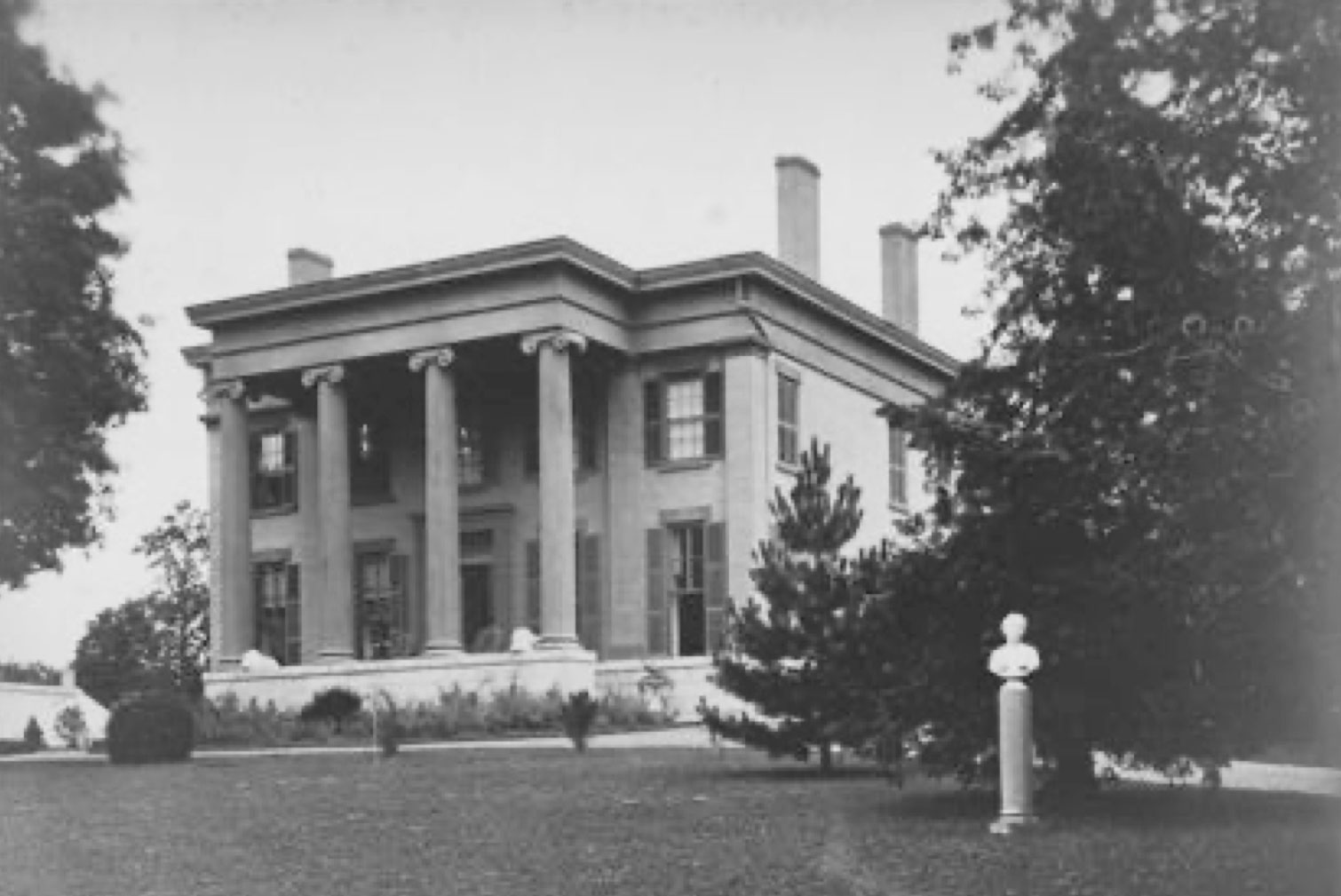 Born in 1810 as the third son of Christopher Morgan and Nancy Barber, Henry Morgan spent his entire life in Aurora, attending school at the noted Cayuga Academy and developing thriving businesses. Like his brothers, Henry was an entrepreneurial businessman. In 1831, at the age of 21, he was invited by his older brother Edwin (or “E.B.”) to become a partner in the “E.B. and H. Morgan Store.” (Today, E.B. Morgan’s home is now one of the Inns of Aurora.) Together their businesses thrived, trading goods from the Morgan Store and running an accompanying shipping business through the Erie Canal. Henry Wells—founder of Wells Fargo and American Express—landed in Aurora in 1832 to trade goods with the Morgans. In his book, A Brief History of Aurora, N.Y., historian Temple Hollcroft describes this fateful scene:

When his boat landed at Aurora on May 5, 1832, to load wheat, Henry Wells stepped ashore on the threshold of the Steam Mill, and there he met Edwin B. Morgan and Henry Morgan, both, very probably, for the first time. E. B. Morgan was to become his best friend, business associate, adviser in founding Wells College, and a generous contributor to its endowment and later development; Henry Morgan was to become a trustee and benefactor.

Following this serendipitous meeting, each of these three men went on to weave themselves into the fabric of Aurora’s history. A year later, E.B. would build the Aurora House—now known as the Aurora Inn—as a stop on the Wells Fargo Stagecoach Express. Henry Wells later made Aurora his home, and in 1868, founded Wells College, one of the higher educational institutions for women in the country. Meanwhile, Henry Morgan set his sights on developing a variety of businesses in a young, rapidly expanding, bustling country. 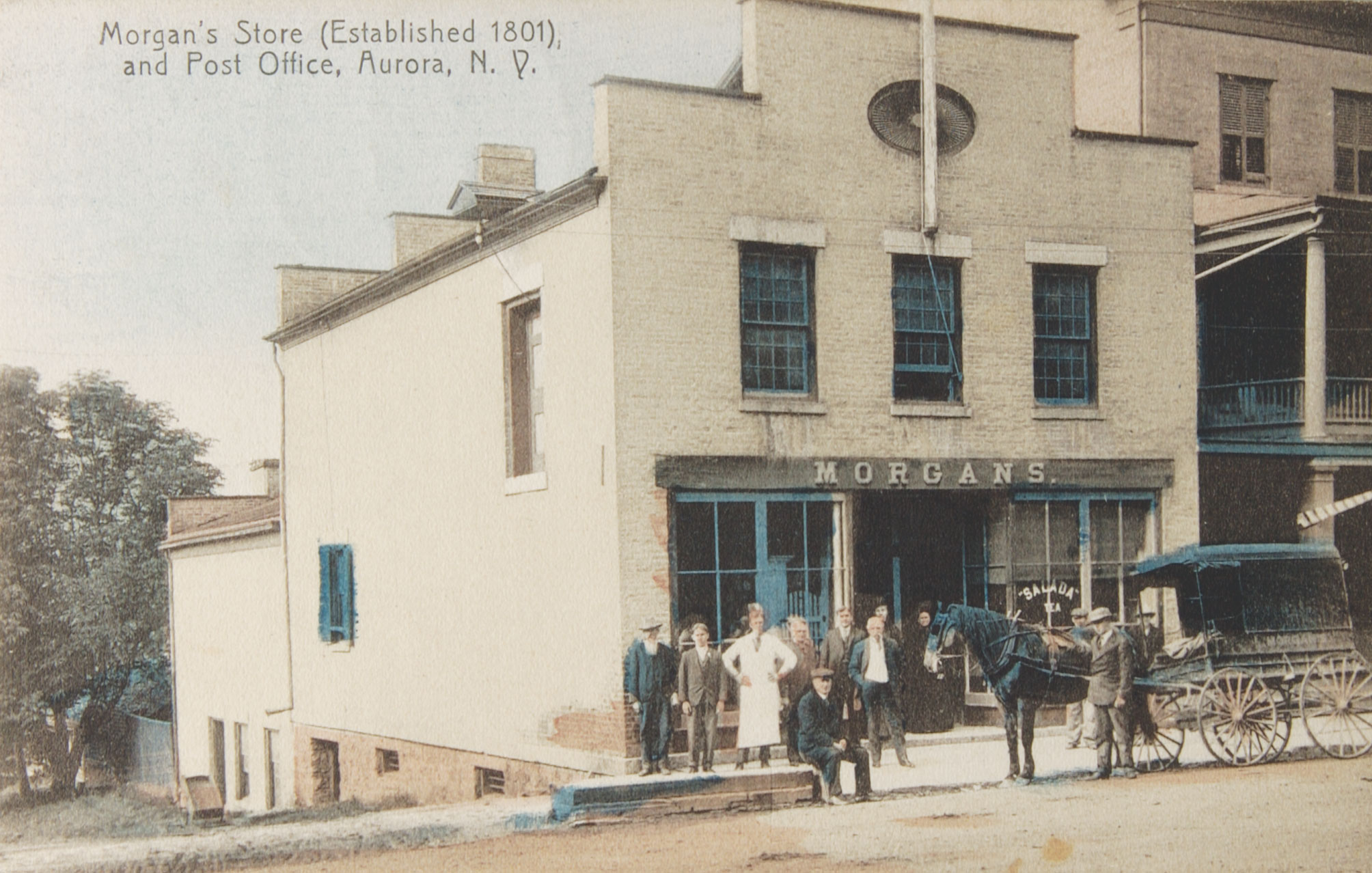 The Morgan Store, where the Village Market now stands.

Beyond his interest in the family store, Henry served as president of the Cayuga Lake Railroad Company and later as president of the United States Pacific Telegraph Company. As a demonstration of his early commercial success, Henry built his grand Greek Revival home in 1838—at the age of 28—with monumental Ionic columns so as to be easily admired from the lake. It was in this house that he and his wife, Mary Platt from Tioga, New York, would raise their daughter, Kate Morgan, who would one day inherit the property.

In addition to the exterior of his iconic home, Henry’s stylistic influence worked its way throughout the property and beyond. His lifelong travels through Europe yielded numerous treasures and inspiration from his journeys. While in Munich, Germany, he purchased two stained glass circular windows for the Presbyterian Church, and it is said that the 1878 dining room addition of Taylor House, built in the Renaissance revival style, was inspired by a visit he made to a Florentine palazzo. He built brick walls around his garden and vineyard for privacy, though often generously invited Wells College students to visit and eat their fill of grapes. 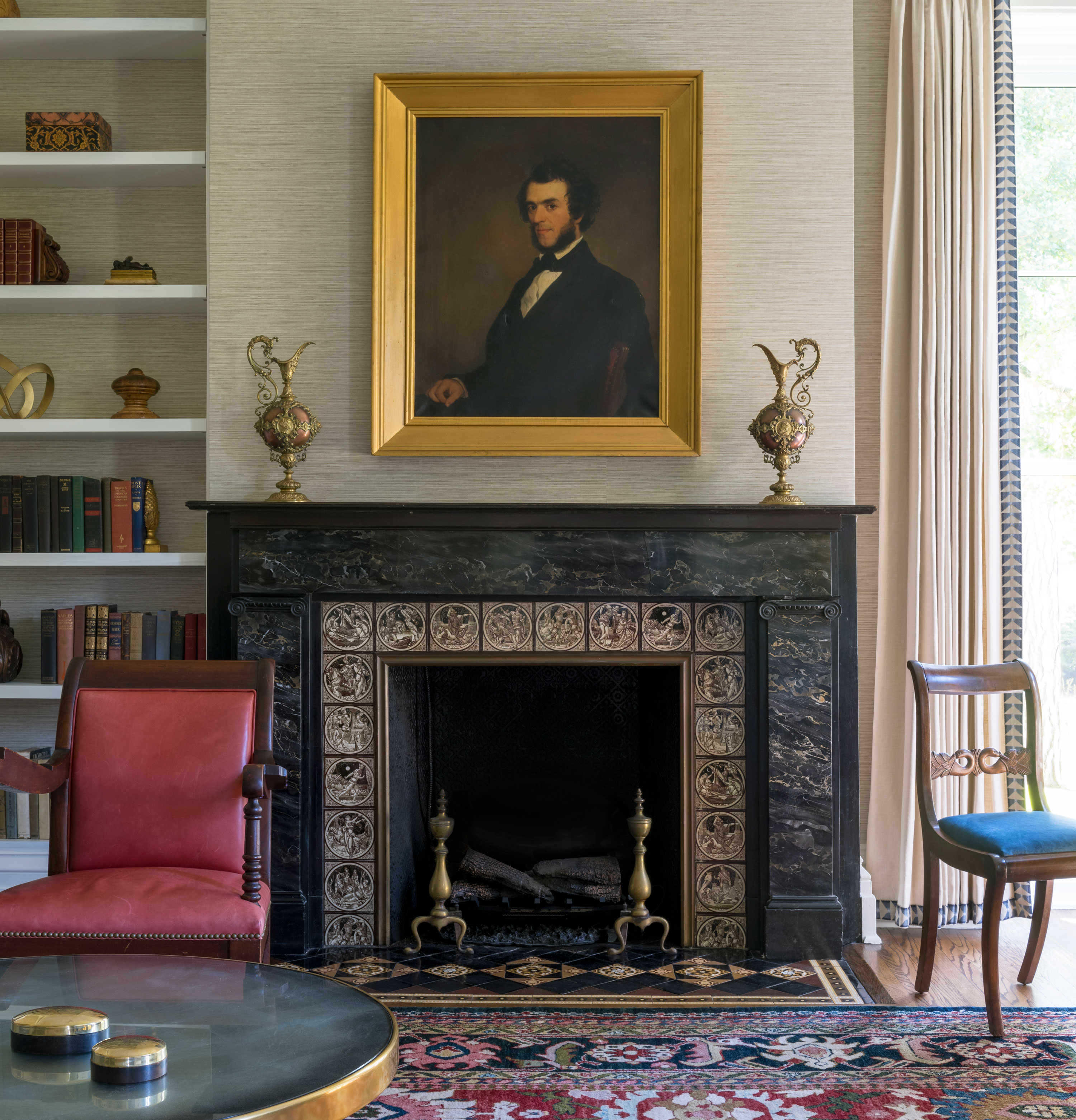 Henry Morgan’s work was far-reaching and influential. In addition to his leadership in local and national businesses, Henry’s shipping company was responsible for building the first modern passenger steamboat on Cayuga Lake—named the Kate Morgan, after his daughter. He also took an interest in supporting the local community, serving as a trustee of Wells College from 1871 to his death in 1887. Following his death, his residence would continue to play a major role in the growth of the college—first as a preparatory school for Wells students, and later as the residence of the college president.

A drawing room at Wallcourt.

In 1895, Wells College closed its preparatory department, which had been a popular offering at many women’s colleges and seminaries. To meet the demand of the existing preparatory students, Sarah Yawger of Union Springs rented the house from the late Henry Morgan’s estate and opened the Wells Preparatory School. In 1899, Sarah hired Anna Goldsmith, a Wells College alumna, to teach at the school, and upon her death in 1901, she left the school in Anna’s care.

Anna subsequently purchased the property from the Morgan family and began making changes to grow the school. The “vine house,” or greenhouse, was removed; the remaining brick wall from Henry Morgan’s garden inspired Anna to rename the school “Wallcourt: Miss Goldsmith’s School for Girls.” By 1910, enrollment at the school grew to the point that a new dormitory was needed; Wallcourt Hall (today, one of the Inns of Aurora) was constructed to provide additional housing for students and teachers. Wallcourt graduates frequently went on to study at Vassar, Wellsley, Smith, and, of course, Wells. Anna’s school was held in such high esteem that its annual literary magazine, The Wallcourt Lion, attracted advertisements from both local and major businesses, ranging from the Tea Room in Aurora to Tiffany & Co. in Manhattan. 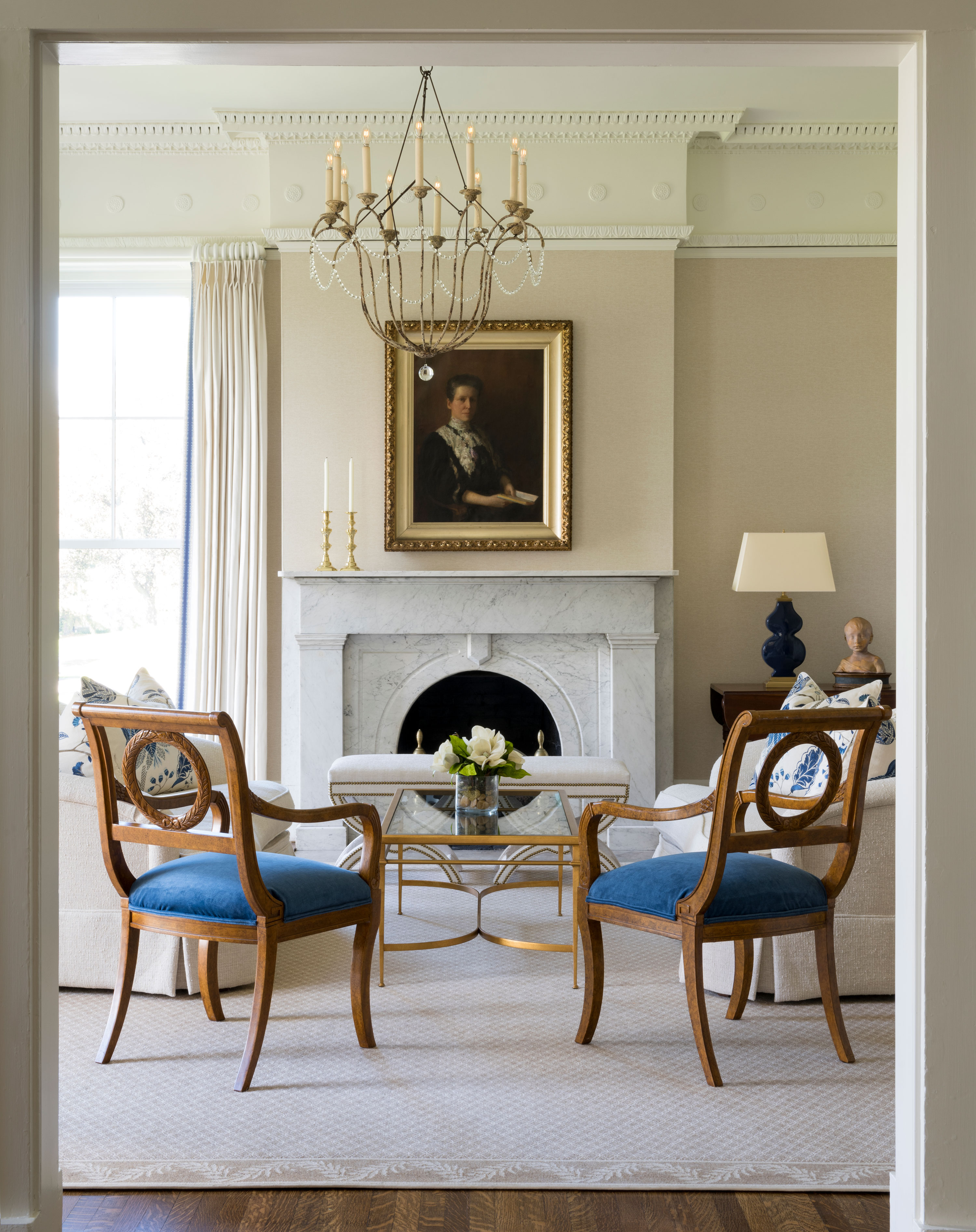 In 1913, Anna Goldsmith married William Taylor of Lyons, New York, a widower with one son, Myron. She split her time between Lyons and Aurora, and her school continued to thrive. After William died in 1918, Anna redoubled her efforts at the school, constructing an elegant boathouse and expanding the academic year to include a summer school. She died unexpectedly in 1921 in the midst of planning an additional dormitory for her thriving school.

Following her death, her sister Kate Goldsmith continued to run the school until its closure in 1928. Anna’s stepson then presented the property to the Wells College Alumnae Association, at which point it passed into the care of Wells College under the name of Taylor Hall, where it would eventually serve as a residence for the president of the college.

In addition to its function as a presidential residence, Taylor House also became a fixture of public life in the village, and many Aurora residents have fond memories of attending parties and celebrations there throughout the years. Taylor House is a contributing property to the Aurora Village-Wells College National Historic District, which entered into the National Register of Historic Places in 1980, and in 1998 was designated as a Village Landmark. Aside from college-sponsored dinners and receptions, each December, the college president welcomed the Aurora community to Taylor House for a holiday open house with carols, refreshments, and good cheer. 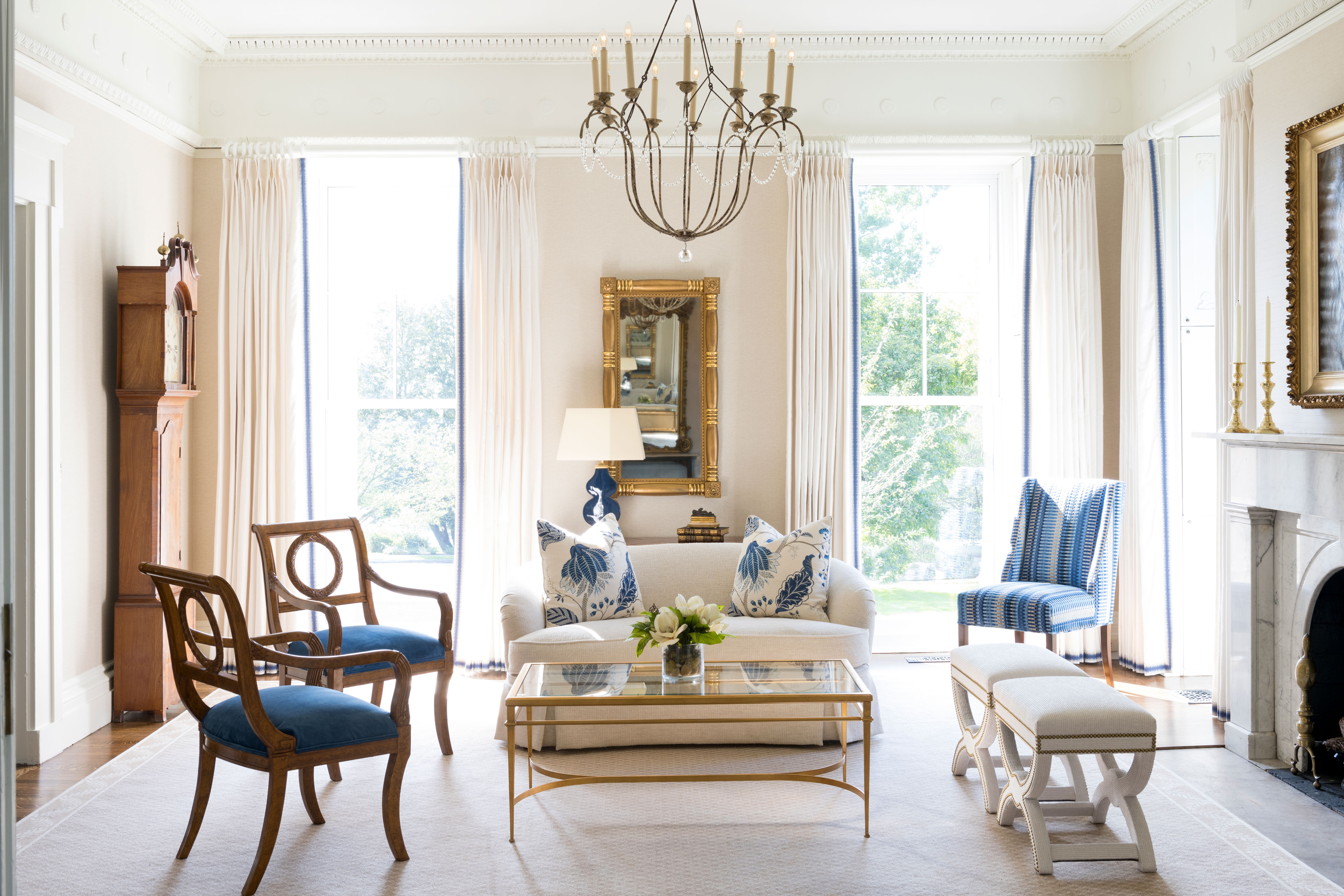 Taylor House now enters a new chapter of its history: while maintaining its historic character, with many of its distinctive spaces preserved in their original layouts, the building has been renovated to become a fully modern conference and events space.

The capstone project of Pleasant T. Rowland’s two-decade campaign to restore the architectural jewels in Aurora, Taylor House represents adaptive reuse at its best. On the first floor, gracious parlors, fine architectural details, and a dramatic dining room with a barrel-vaulted ceiling have been carefully maintained and refreshed. Upstairs, original marble fireplaces and delicate plasterwork have been preserved, while the floorplan has been reimagined and state-of-the-art technology added to allow for flexible meeting spaces.

Many thanks to the Wells College Archives at the Louis Jefferson Long Library in Aurora, New York for providing invaluable resource material and support.