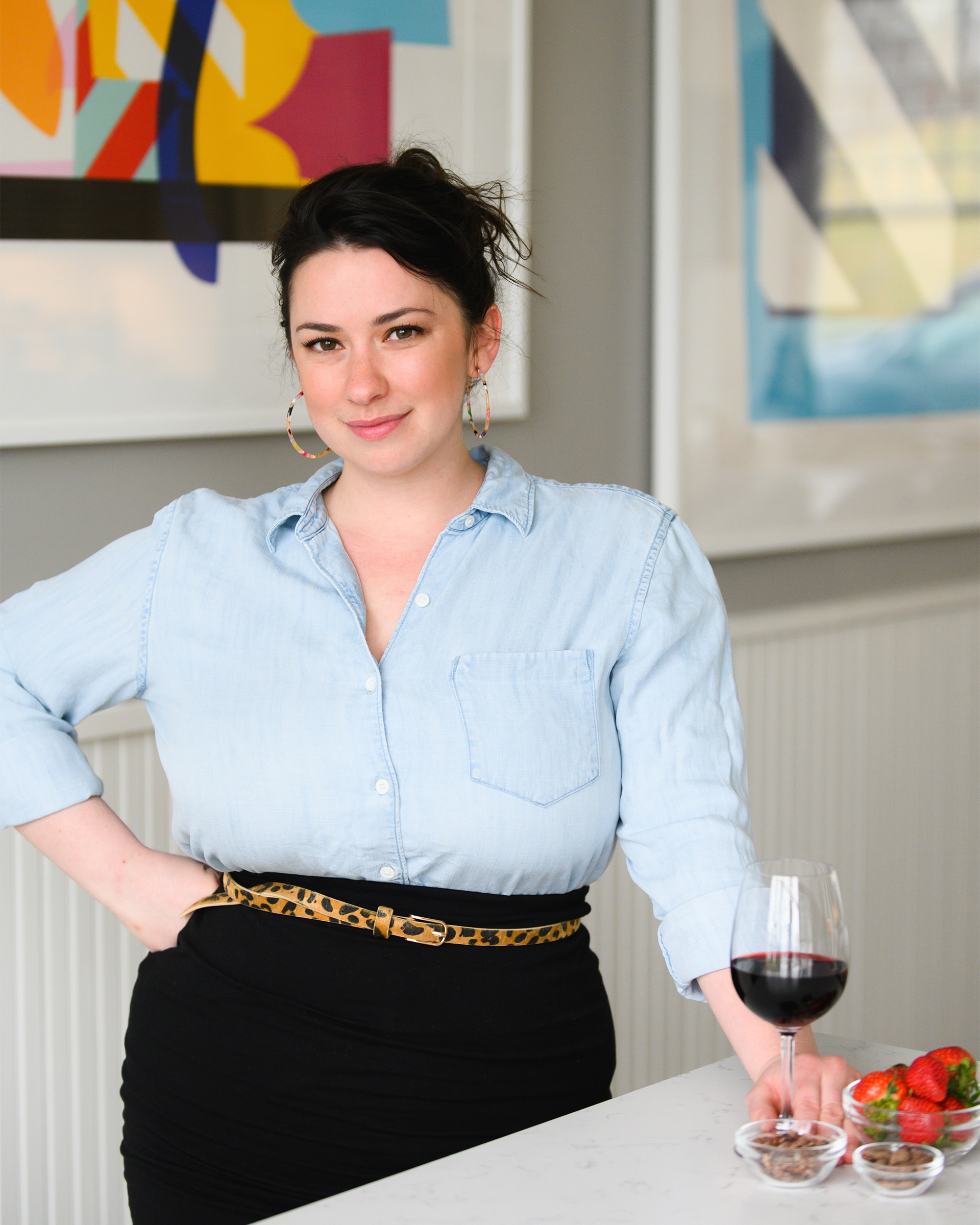 Grace Mattingly is the Taste Curator at Aurora Cooks!, and an important member of the team behind the Inns of Aurora's new collection of culinary products, the Pantry Collection. In this conversation, she describes the inspiration behind two of the recipes that she contributed to the collection, as well as the journey that brought them to the Inns of Aurora.

What’s your current role at the Inns of Aurora, and what led you to this particular position?

Grace: I’m the Taste Curator at Aurora Cooks!, currently cooking as well as hosting, doing a little bit of both—front of the house and back of the house, as we would say. I think what led me to this position was my love for both... I started in the front of the house, right here in this building, when I had my first job as a “Dorie’s Girl,” making milkshakes and coffees. I grew up in Aurora, and during my childhood this building was Dorie’s – an ice cream and candy shop.

As a kid, you’d come in with your soaking-wet bathing suit and your one dollar, asking “What can I get with my one dollar?” Which was one hundred Sour Patch Kids, that Dorie would make you count out yourself on the splintery counter. (You’d never get away with that now.) Dorie’s became Dorie’s Cafe, and I worked there as my first job. My sister worked there, all my best friends worked there. Then, I jumped from scooping ice cream into fine dining.

From there, I just continued to work in the hospitality business… I found that my real passion was with food. A lot of front-of-house people, you could see them go in a direction, maybe they started to get really into cocktails or wine, and my direction was food. I was always that server who was asking too many questions, or sneaking behind the line to taste something, I was always driven by the food, and I think that’s how I ended up in this position where I’m able to have the best of both worlds, being able to cook and embrace my love for food, but also be able to entertain people, which is just part of who I am.

Aurora Cooks!, where many of the items in the pantry collection are made.

What can you tell us about the launch of the new Pantry Collection?

We want people to take home a little piece of what they experienced while they were here in Aurora. Things like those beautiful spiced walnuts that you have on a salad at your best friend’s wedding. Or the jam that you had on your toast at breakfast. We want you to be able to take those experiences home and share them with your loved ones, because—for us—we really, truly believe that food is love. So that way when you’re at home you can relive that experience. Also, with the area that we’re in, there’s just much to offer when it comes to culinary products, and we want to showcase the bounty that is the Finger Lakes.

We started with jam, and now we’re moving on to some other treats… some of them are inspired by our culinary team’s personal experiences, and some of are inspired by things that have been mainstays at the Inns of Aurora. So, for example, our pastry chef, Trina’s, scones... if you come to Aurora, you’ve had the same scones for ten years—and every time, it’s wonderful. We wanted to give people an opportunity to take that scone home with a scone mix. For myself, I serve the tomato jam and the spiced dukkah blend at Aurora Cooks!, and those have become a staple here… those are two of my contributions as recipes that I really love.

You’ve said that your time living in Ireland was the inspiration behind the Tomato Jam and Spiced Dukkah Blend. What originally motivated you to go to Ireland?

I have dual Irish citizenship through my grandmother… there was a point where I thought that I could either keep working at the same job I’d been in, or I could go on an adventure, so I packed a bag and bought a one-way ticket. I had an AirBnB for the first three days, and after that I had no plan. Somehow, I ended up working at a Michelin Bib restaurant in Galway, and cultivating the most wonderful group of friends, who became my Irish family. I was very blessed with the way things worked out—but I will also say that it was very much the luck of the Irish. I’m very grateful for my time there, it’s such a special place.

What’s something that people who haven’t been to Ireland might be surprised to learn?

We forget that Ireland is an island, and it has the most phenomenal seafood. As Americans, we think of Irish food as shepherd’s pie, and Guinness stew, and overcooked lamb—and in fact, it’s the complete opposite. Only the tourists eat the Guinness stew! The food was all very fresh and very local.

There’s a significant fine dining scene in Ireland that was very inspiring… one of the most amazing dishes I had was a sous-vide wedge of cabbage, and in between each leaf was a perfectly poached mussel. But you didn’t see the mussel at first, you just had this beautiful wedge of cabbage that was soft and tender and buttery, and then—Oh!—there’s a really plump, buttery mussel right there. To me, that dish and that experience is food and beverage in Ireland: taking these things that are right there, right in your backyard—taking these things that your family has eaten for centuries—and turning it into this beautiful, sexy dish, that’s literally just four ingredients.

What’s the story behind the Tomato Jam, and what’s the best way for people to enjoy it?

The tomato jam is something that was inspired by my time in Ireland. There, they have a ham and cheese toastie, which is a very traditional dish that you would find everywhere… it’s one of those things that you could get any kid to eat, like a grilled cheese sandwich. You’d have what they’d call a tomato relish: it’s got a little more flavor and texture than a ketchup, and it would go on your ham and cheese sandwich. So this was a play on that.

I added some fennel and cumin seed... the first time I made it, I was just using up some leftover Finger Lakes dessert wine, and ended up with this beautiful, sweet, sticky tomato jam, that went kind of between an Irish tomato relish and a chutney that you would find on a cheese plate. I’ve eaten it both ways, and it’s always delicious, either on a ham and cheese sandwich or as a compote on a cheese plate. When it was first debuted at Aurora Cooks!, we served it with homemade brown Irish soda bread and a piece of Sheldrake Moon brie from Lively Run Dairy.

What was the inspiration behind your Spiced Dukkah Blend, and how might people incorporate it into their cooking?

The spiced dukkah blend is something that I first had at a restaurant I worked at in Galway, called Kai. It was a huge part of my life while I was in Ireland. Kai was run by Jess and Dave Murphy… Jess was the powerhouse chef, you definitely walked into the building and knew that she ran the show. She had this really powerful personality, and her food had so much personality to it as well. The spiced dukkah blend was this mixture of toasted seeds and nuts and spices, and there was always a bowl of it to sprinkle on the soups at lunchtime, or on top of a hummus plate, just to give it a little salty texture, a little spice. For me, it was the thing that—when you were really hungry in the middle of service—you’d go back to the kitchen with your puppy-dog eyes and your hand out. (Laughs.) You’d get a little spoonful of dukkah, and that would be what would hold you over until service was done and it was your turn to sit down and eat.

In Ireland, there’s a lot of amazing Indian food… even the curry you’d get at the local neighborhood pub would be just as good as what you’d find in an authentic Indian restaurant in upstate New York. So, I came back with a lot of those spices and flavors in my repertoire, and really loving to do different curries and dahls. I love to put that dukkah on top of those dishes: it gives you a little crunch, a little salty, and just a little bit of that spiced flavor. For me, here at Aurora Cooks!, instead of using croutons or nuts on salads, I use the spiced dukkah, because it gives you the same effect without singling out anybody with allergies, since there’s no nuts and no gluten in it. It’s a really lovely snack, and a perfect topping for anything. Tasting those things really takes me back to Galway.