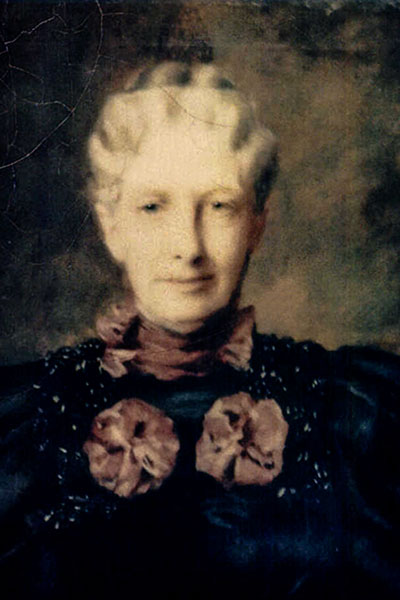 It was the beginning of a new century and a tumultuous time in American history. In 1901, at 65 years old, Louise had just gone through the third of three presidential assassinations in her lifetime. President Lincoln’s murder after the nightmare of the Civil War and then President Garfield’s just 16 years later had been horrible enough; now, President McKinley had been shot in Buffalo—only two days by stagecoach from Louise’s home in Aurora, New York, practically in her own backyard.

Louise’s two sons, Alonzo and Robert, had left the safety and serenity of Aurora to explore the world beyond the quiet shores of Cayuga Lake. Robert, the younger of the two, had earned a degree from Princeton University and was safely married by 1901. His older brother, Alonzo—after over a decade of seeing the world and enjoying society life—was showing signs of settling into a respectable second marriage.

By 1901, the two brothers had established themselves and started their own families. Louise felt that her health, which had always been fragile, was beginning to fail her. It was time to bring her sons home to Aurora, away from the commotion of the dawning 20th century.

It would be easier said than done.

Robert was the more dutiful son. He would probably feel obligated to honor his aging mother’s wishes when she asked him to come back to stay in Aurora. But even for him—freshly married, trained in the groundbreaking new field of electrical engineering, with his own professional ambitions—returning to the peaceful village by the lake might feel stifling.

Corralling Alonzo would be an entirely different challenge. 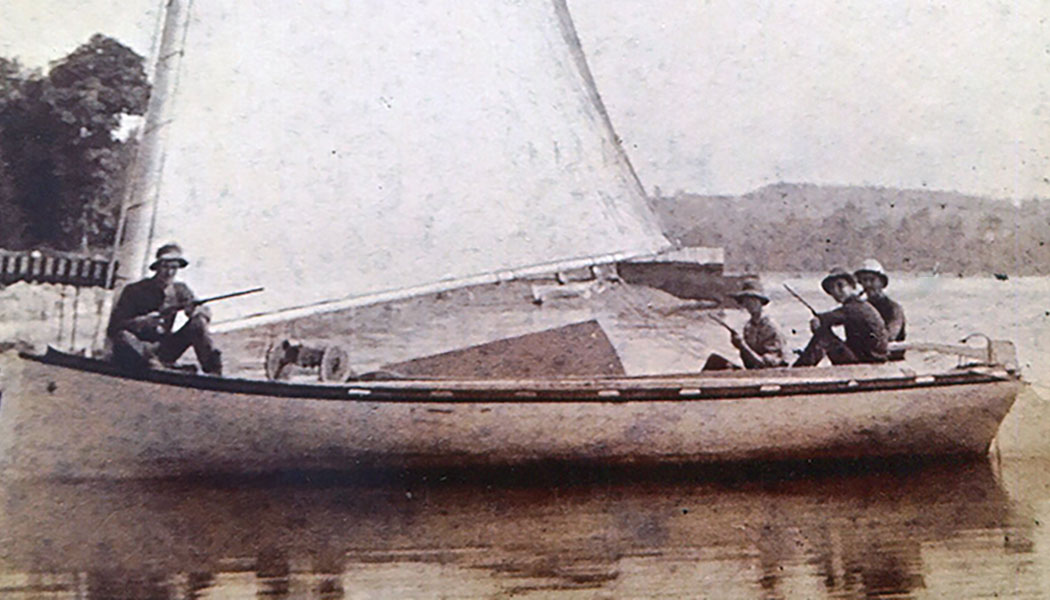 Alonzo Zabriskie and friends in a sailboat on Cayuga Lake

Alonzo had never seen much value in the established path of schooling and settled life. Being born deaf, and successfully learning to overcome his disability, he might have felt that he’d done enough work by the time he was old enough to leave home. He’d spent 15 years away from Aurora, traveling, sporting, and living off his family’s investments. The little village wasn’t big enough to contain him: in 1901, Alonzo was only a few years away from making national news for killing a hammerhead shark off the coast of Florida with a revolver. Pulling him away from his adventures would be a daunting task.

Fortunately, Louise had plenty of resources to summon in the interest of bringing the brothers home. 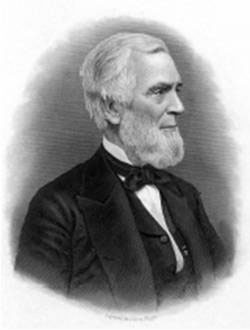 Louise Morgan Zabriskie was the daughter of Edwin Barber “E.B.” Morgan, one of Aurora’s town fathers and an early scion of American industry. He was the first president of Wells Fargo; a director of American Express; an original shareholder of the New York Times, and a three-term congressman to the U.S. House of Representatives. After making a fortune in shipping and transportation—first in the shipping business that traveled through the Finger Lakes along the Erie Canal, and later in the stagecoach industry—E.B. constructed a grand Italianate mansion on the shore of Cayuga Lake.

Built for an (at the time) astronomical $50,000—about $1.5 million in today’s dollars—the E.B. Morgan House was just down the road from one of E.B.’s earliest ventures: the Aurora Inn, built in 1833, three years before Louise was born.

The Morgan family’s stature in Aurora continued to grow throughout Louise’s life. Not long after she was married to Nicholas Zabriskie, her father began investing in the Cayuga Lake Railroad Company. The railway ran directly across the grounds of the Morgan’s lakeside mansion, allowing E.B. to monitor his new investment from his porch, pocketwatch in hand, to make sure that things were running smoothly and on schedule. The Morgans were also instrumental in the founding of Wells College, which shaped Aurora’s growth and development more than any other institution.

Needless to say, Louise grew up in a family that was accustomed to making things happen. 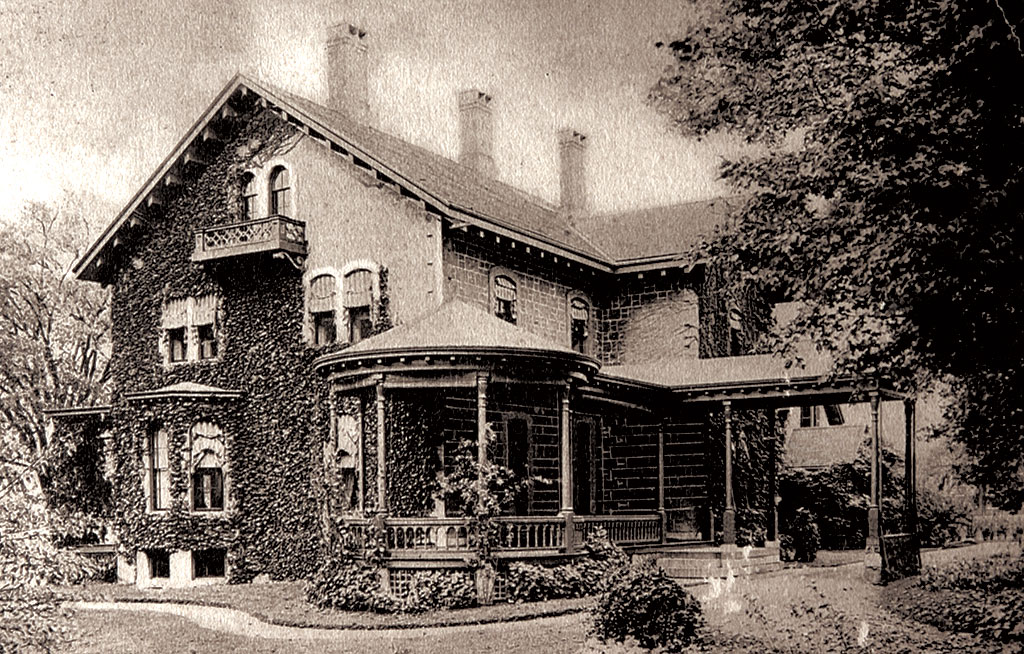 When E.B. passed away in 1881, Louise and her husband took ownership of the grand Italianate mansion. This was the home in which Alonzo and Robert would spend the remaining years of their childhood, before leaving home to seek their fortunes as adults. Twenty years later, from the stone mansion her father had built, watching the sun set on Cayuga Lake, Louise would launch her campaign to bring her sons back home.

If Louise was successful in convincing Alonzo and Robert to return to Aurora, they would need somewhere to live.

The old Morgan mansion was generously appointed for a family and their short-term guests—not nearly big enough for Alonzo and Robert plus their own families. Two additional houses would need to be found. But the brothers might not be convinced to move back to Aurora if they were expected to live in some cobwebby relic.

Two new houses built especially for them might do the trick.

Nobody who has siblings, or is the parent of siblings, could envy the task that Louise had set herself. Two houses for two brothers, both accustomed to living in a certain style; one older, the other more accomplished. Any hint of favoritism or pandering could wreck the whole plan. Building the two houses to the satisfaction of both brothers would be require careful planning.

The results produced by Louise’s efforts were extraordinary: two grand houses that exemplified the family’s legacy in Aurora, the relationship between the two brothers, and their mother’s regard for both of them. 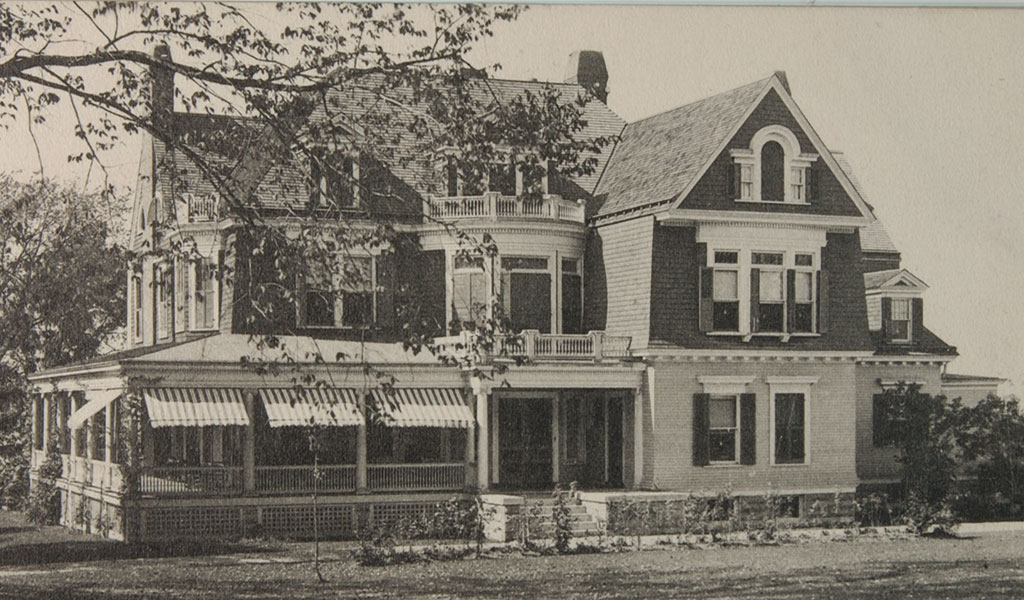 The house built for Alonzo Zabriskie in the early 1900s.

Alonzo’s home was completed first, in 1903. Occupying the lakeside property adjacent to the Morgan mansion, this house was built for entertaining, and reflects Alonzo’s enthusiasm for society life. It’s not hard to see an appeal to Alonzo’s sense of adventure in the house’s views of the wind-tossed lake. Maybe the siting was meant to keep Alonzo in Aurora by evoking the elemental unpredictability that he sought out in his boating and hunting expeditions. (The house’s close proximity to Louise’s home, near enough to keep an eye on her wilder son, might also not have been coincidence.)

The house that was built for Robert a year later was strikingly different from Alonzo’s. Set in the heart of the village, the outlook of Robert’s house was less focused on the lake itself. Robert’s pillared front porch looked out to the lake, but also to the products of his family’s legacy in Aurora. The house’s commanding view encompasses the village landmarks that his family helped build, including his grandfather’s Aurora Inn. 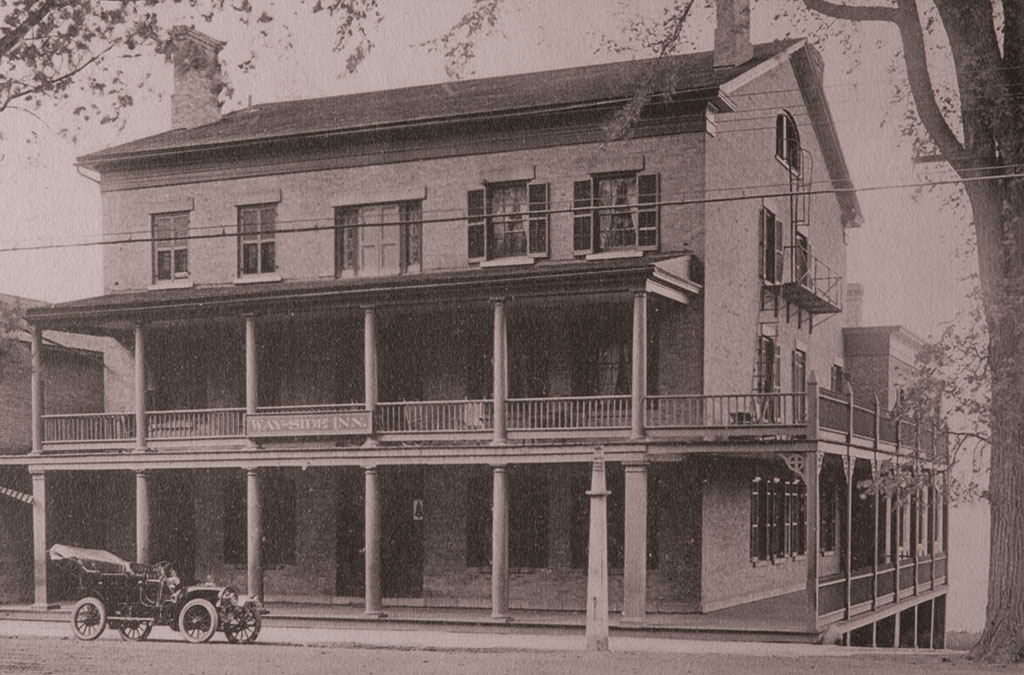 The Aurora Inn -- then "The Way-Side Inn " -- around the time Robert's house was built.

Whereas Alonzo’s house was built in the popular Queen Anne style—with an asymmetrical façade and an extensive wrap-around porch—Robert’s house was a more stately Georgian Revival: elegantly reserved and dependably symmetrical. It was the home of an engineer, certainly; it was also an outstanding monument to the family legacy, to which Robert was emerging as heir.

If the house built for Alonzo catered to his recreational pastimes, it’s hard not to imagine Robert’s house—a house fit for a statesman—being designed to fulfill his role as successor to the family’s legacy.

Despite the outward differences between the two houses, there is a resonance in their fundamental designs. The design of each house is centered around a grand staircase; in both houses, the design of the central staircase is almost identical. Like the two brothers—despite being distinctly unique, with two different views on the world—they share some of their strongest features in common.

With the two houses completed, Louise succeeded in bringing her sons back home. Robert returned to Aurora when his house was completed in 1905; Alonzo continued to spend winters in Palm Beach, but returned in between travels to his house in Aurora. The family was able to enjoy time together in the village by the lake before Louise passed away in 1906. Her sons were home, living in two newly-constructed symbols of her family’s influence; she could leave her legacy securely in the hands of the next generation.

True to form, following their mother’s death, Alonzo continued to travel and socialize, using the house by the lake as an occasional party venue. Robert established himself in Aurora, and went on to become one of the village’s most beloved benefactors. The “big white house on the hill,” emblematic of Louise’s confidence in Robert’s future, became the center of his family’s influence in Aurora.

In October 2019, Robert’s house—now known as Zabriskie House—will be restored to its former grandeur as one of the Inns of Aurora, joining Alonzo’s house (Rowland House) and Louise’s house (E.B. Morgan House) in the next chapter of Aurora’s history

Be one of the first guests to stay in Robert’s beloved home, newly restored and re-imagined.

Our thanks to Dr. Linda Schwab, Aurora Village Historian, for her research on Alonzo Zabriskie reflected in “A Gilded Age Life.” Research and information from that piece was used in the crafting of this essay.